Research has found that for business-to-business (B2B) and business-to-consumer (B2C) purchasers, the most important factor affecting their trust in a prospective vendor is their customer service experience (CMSWIRE, 2014). For nearly two thirds of respondents, the key to a positive customer experience was a quick resolution to an enquiry.

According to the same research, when customers or prospects use social media to contact an organisation, 42% expect a response within an hour. Nearly two-thirds expect a response the same day. Indeed, it appears that people select social media as a contact channel because they assume it will get a quicker response, as opposed to being in a voice queue or waiting for a reply to an email (MITSloan, 2014).

The problem for contact centres becomes apparent when we look at the actual customer experience involving social media. Evidence highlighted below suggests that most individuals in the UK who choose social media to contact an organisation are having a negative experience where response times are concerned.

The following chart below illustrates the gap between expectation and experience for social media as a customer contact channel (Our Social Times, 2013 & The Social Habit, 2012): 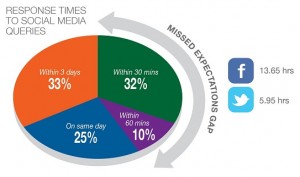 This suggests that UK companies are failing over 40% of customers or prospects who use social media as a contact medium. Yet, if the total volume of social media interactions is only expected to reach 2.5% by 2017, does this gap in satisfaction really matter? It does, for the following reasons.

Contact centres should at least monitor their social media feeds

It only needs one dissatisfied social media user with a large following to go public about a negative experience for a brand’s reputation to be damaged. Furthermore, competitors are adopting opportunistic tactics to exploit the misfortune of their rivals.

Social media usage is forecast (Searchmetrics, 2014) to continue growing for the foreseeable future. Google+ will become a major player but the volume of niche platforms is expected to grow as well. Forrester, 2014 has already identified over 200 different social media networks. Any one of them could be the source of an inbound contact centre interaction. So, the pressure to successfully accommodate social media as a customer contact channel will continue.

Companies should, at the very least, be monitoring social media feeds to identify any negative posts as soon as they appear. Managing such posts could be as simple as persuading the dissenter to communicate offline, away from the public gaze. All that is required is a robust monitoring system that can filter negative posts from all the other social media traffic and route it to an appropriate agent.