Can you have excellent customer service with a disengaged team? 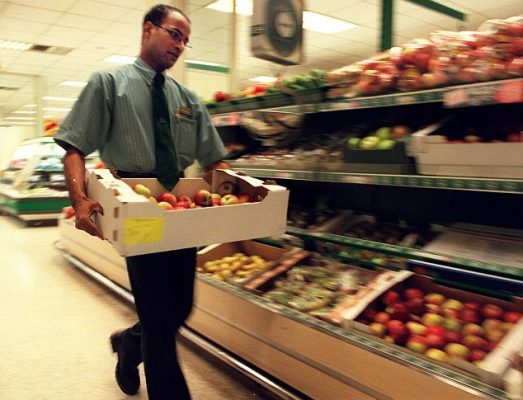 I recently went into a local high street supermarket to buy a few essentials, milk, bread and bits and pieces on Saturday afternoon.

Having selected my groceries I was queuing for the till. It was taking a while. The customer in front of me had a lot of shopping. Another employee approached me and said:

“If you’d like to come this way sir I will open up another till.”

“Great” I replied, following him down the aisle.

“How are you today? “ he asked smiling but not making eye contact.

“Fine” I said, grateful that I was going to be served and surprised but happy that he was making an effort to have a conversation with me. He must have been trained recently, I thought.

How about you?” I asked cheerily.

“I’m at work, what else can I say,” He shrugged, conveying a sense of resignation.

I remembered his was a similar response to the last assistant I’d had the same sort of conversation with. When I enquired how they were, in response to them asking me, they’d said:

“I’ll be fine once I get out of this place. Only another hour and half to go!”

It seemed at odds with the friendly greeting and like they were wishing their lives away.

Now, I am not saying working in retail is always easy. I have done it myself and know it can have its challenges. But there is more to this.

Returning to the conversation, I found myself thinking about this young man’s comment. It seemed to reveal that he didn’t feel that he could have a positive experience at work. It was something that he had to do, under sufferance. He didn’t seem able to choose how he felt at work and he underestimated the impact his comment had made on me.

In our conversation, he had started by following a mental script of how to greet customers, which worked reasonably well until he volunteered how he really felt. Then the truth of how he really experienced his work surfaced, overcoming the professional, smiling but detached way of interacting with me.

I didn’t mind that he had stepped out of his work role. He thought he was being honest and perhaps trying to make conversation. But what he said made me think. It seemed that he believed that he couldn’t be happy at work. How unfortunate, I thought, given that he is probably spending 8 hours a day there. Perhaps he loved to hate his job…a sort of convoluted negative satisfaction.

Of course, many might say ‘what do you expect working on the till on a Saturday; it’s not a great a job! And it doesn’t pay well! But those arguments miss the point. Surveys have repeatedly shown that remuneration is not necessarily linked with employee satisfaction.

Figures from the Chartered Institute of Personal Development (CIPD), a professional HR body, showed that almost one in four workers were looking to leave their jobs because of the failure of managers to engage and retain staff. (1)

So is management to blame? Is this poor staff motivation, unfair work practices and no clear career structure taking their toll?
Possibly. But he was the one doing the job. Surely he has some responsibility for how he experienced his work?

Certainly the mind-set he was approaching the job with and his beliefs about the job were colouring his perception of what was happening to him and how he talked with me in the moment. He seemed unaware of this.

His response isn’t unique. Many people say they don’t like the job they do but continue to do it and draw a salary. Denial and discounting of the positive elements of work is not limited to specific industries or types of work either. Whilst having greater autonomy has shown to be linked to job satisfaction it is not a given. Many professional and self-employed people say they are dissatisfied at work.

Another thought flashed across my mind, there was a learning point here. But why was I bothered? I’d been served; he’d done his job. His attitude continued to jar with me. Not because it was ‘poor customer service’, (although you could say he wasn’t likely to win brand ambassador of the year) but because he seemed to be fundamentally limiting himself.What a waste!

My training experience has shown me that development conversations are not understood without the right context and need to be done at the right time, in the right way. Attitudinal change needs to be addressed carefully and respectfully, in the right environment.

So, whilst I was interested, I judged it was too big a conversation to have with him. Did he miss out or escape?

The assistant clearly had a blind spot regarding how he experienced himself at work. There was an opportunity for learning however it wasn’t my job to tell him. I thought any intervention by me would be misinterpreted as an attack. I took the path of least resistance and attempted to cheer him up:

‘Well at least you are earning” I said quickly, giving him a mental justification for why things were really all right and reinforcing the belief that work was a means to an end. All very rationale. It seemed to work.

It didn’t address the crux of the issue, as I perceived it, but it moved the conversation on positively. He told me how much my shopping had come to and asked for my loyalty card. I gave it to him. He scanned it and I paid.He thanked me for shopping. I thanked him for serving me.

A simple transaction where I got more my groceries and food for thought. Isn’t life Grand?

For additional information on dancing lion visit their Website, Email or view their Company Profile

Be the first to comment on "Can You Have Excellent Customer Service With A Disengaged Team?"