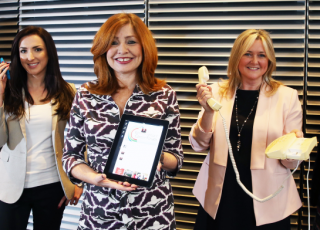 The awards, headline sponsored by Red Contact Centres, have been hosted by star names including Alan Carr, David Walliams and John Barrowman in recent years and organisers are keeping the names of 2015’s celebrity guest under wraps.

The awards, which for the first time will be held at the Wales Millennium Centre, celebrate both individuals and companies for their achievements over the last twelve months in Wales’ thriving contact centre industry.

Phil Atwell, 42, is a finalist in the ‘Contact Centre Manager of the Year’ category. Phil has been the contact centre manager at Dwr Cymru Welsh Water, in St Mellons, Cardiff, for four and a half years, following a 13 year stint at Vodafone.

Phil said: “I was really chuffed to be nominated for this award, and feel as though I am already a winner. I would love to actually win, so I can share the success of a fantastic year with the wonderful people at Dwr Cymru who made this nomination possible.”

Nicky Hopkins, 41, from Swansea joins Phil in the ‘Contact Centre Manager of the Year’ category. After 20 years’ service at HSBC, working in numerous roles within the UK branch networks as well as contact centres across the UK and in Jersey, Nicky progressed to her current role of manager 12 months ago.

Nicky says: “My team are delighted with my nomination as it reflects well on the hard work of the each and every one of them. We’re all really excited to see what happens on the night.”

Other managers up for the award include Cherri Fowler of 118 118 Money, Kelly-Anne Ralph of PHS Group, Caroline Shears of Tesco, Wendy Crotty of Barclays Partner Finance and Victoria Crawford of Sinclair Group.

“The Welsh contact centre industry is one of the only to have seen continued growth and inward investment over the past few years, bringing around £650m a year into the Welsh economy. These awards are the perfect way to highlight and promote the industry and the contribution it makes to Wales.”

The finalists will be honoured, and winners announced at the Welsh Contact Centre Awards ceremony and gala ball at the Wales Millennium Centre on Friday 6th March 2015. A Twitter competition will run before the event where guests can win prizes by guessing the identity of the celebrity host.

Trainer of the Year

Support Manager of the Year: HR/Comms/Engagement

Support Person of the Year: MI/IT

Support Person of the Year: HR/Comms

Team Leader of the Year

Sales Agent of the Year

Support Team of the Year

Good Luck to all of the nominated Finalists – Ed