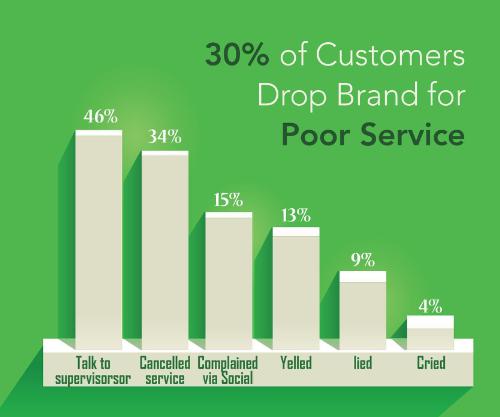 As a result of poor customer service, over two-thirds (69%) of Brits have acted on their frustration when dealing with a company, with nearly half (46%) demanding to speak to a supervisor and over a third (34%) either cancelling their service or stopping using a brand altogether. These are the findings from an online survey conducted by Harris Poll on behalf of ClickSoftware in May 2014 of over 2,000 UK adults.

The global report by ClickSoftware, which looks at the frustrations consumers face when dealing with companies, found utility companies came top in the league with nearly a third (32%) of people naming them the most frustrating industry to deal with for service issues. In a year where energy companies have been blighted by billing problems, over half (52%) of Brits who find utility companies among the two most frustrating, spent over an hour trying to resolve an issue, such as dealing with a billing problem or loss of power, with 4.3 hours the average time people had to wait.

Communication service providers came a close second with over a quarter (29%) of people fed up with the time they wasted, followed by Central Government (18%) and banking (15%), third and fourth respectively.

It’s not just businesses losing money from bad customer service, UK workers are having to take time off to attend to matters during their working hours to resolve issues. The study revealed a total loss of nearly GBP15 billion a year, and an individual loss of almost GBP500 per person*.

And despite the famous British stiff upper lip, one in 10 (13%) have been driven so crazy by poor service they have admitted to losing their cool and yelling at a service representative. Meanwhile others have gone to extreme lengths to get better or quicker service, including lying (9%), crying to the service representative (real or fake tears) (4%) or even begging (3%).

“This is a timely reminder for businesses that customer service is still one of the biggest factors in attracting and retaining customers,” said Robert Williams, Vice President of UK & Ireland of ClickSoftware. “Bad customer service is costing business up to a third of their revenue, and the knock on effect is that people are having to take precious holiday time just to deal with things that could and should be sorted much more easily. The good news is that by having accurate planning and information sharing procedures in place it’s never been easier to address customer concerns and provide an exceptional experience in a cost-effective way.”

“Ultimately, satisfied customers help drive retention and profitability for service organisations. Our research found those that reached a 90%+ customer satisfaction rate achieved an annual 6.1% growth in service revenue, 3.7% growth in overall revenue, and an 89% level of customer retention,” said Aly Pinder, Senior Research Analyst, Service Management, Aberdeen Group([) (1]) . “Today solutions exist to alleviate consumer frustration. Considering the high cost to the bottom line, there is no justification for under-performance. Service organisations of all sizes should consider adopting automated tools to improve forecasting, planning and invest in mobile tools to provide field workers better access to information and the ability to communicate in real-time.”

This survey was conducted online within Great Britain between May 13 and 21, 2014 among 2,053 adults aged 18 and older by Harris Poll on behalf of ClickSoftware via its Global omnibus product. Figures for age, sex, race/ethnicity, education, region and household income were weighted where necessary to bring them into line with their actual proportions in the population. Propensity score weighting was used to adjust for respondents’ propensity to be online. For complete survey methodology, including weighting variables, please contact clicksoftware@mslgroup.com.

*Based on the average UK national hourly wage of GBP12.92 (UK workers average hour rate is GBP13.60 for men and GBP12.24 for women) for a typical 37.5 hour work week, that’s an average GBP484.50 that people lose waiting instead of working. Multiply that by 30.43 million employed Brits and the true cost of frustrated wait time experienced by the UK population emerges at GBP14.7 billion.