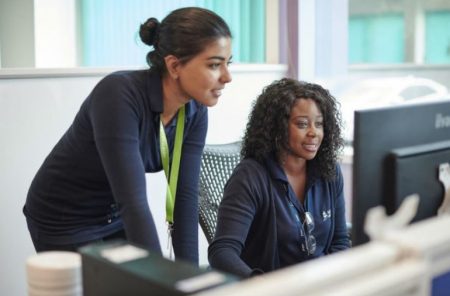 Reuniting a concert violinist with his beloved instrument and helping a driver stranded at motorway services for three days – it’s all in a day’s work for Highway England’s customer contact centre.

Last year the national Customer Contact Centre (CCC), which has recently been awarded an industry accolade, dealt with over 298,000 calls, 68,000 emails and 133,754 other correspondence such as letters as staff worked around the clock, 365 days of the year.

As well as managing 4,300 miles of motorways and major A roads across England, Highways England offers information and assistance for the four million road users who use the network every day.

If members of the public have to ring Highways England, the first contact is usually with the Customer Contact Centre based at the National Traffic Operations Centre in Quinton, near Birmingham. Advisors offer support on a diverse range of topics; from journey planning and real-time traffic queries, to emergency response and, very often, problem solving.

These problems have varied from such dilemmas as a mum desperate to get her lost son home, a confused pensioner trying to get his toenails cut to helping a Bulgarian lady who had broken down but spoke very little English – and was rescued by traffic officers with the aid of Google Translate.

The summer can be particularly busy for the contact centre as new figures released by Highways England have shown that more than 48,500 motorway breakdowns happened between the final week of June and the first weekend of September last year.

Highways England is expecting to respond to an extra 700 breakdowns a week over the 10 weeks this year and we are reaching the peak period.

The first weekend in August was the busiest weekend for breakdowns on England’s motorways in 2018 shortly followed by the final weekend in July, with one breakdown reported every two minutes as drivers set off on day trips and holidays.

Highways England is running a new safety campaign encouraging drivers to remember the basics of motorway driving, including what to do if you break down. Adverts on radio, billboards and online are reminding drivers of simple driving rules to keep everyone moving.

In recognition of the dedication of staff and its customer service excellence, the CCC has now received a Silver Global Standard Award from the industry-recognised Contact Centre Association.

It was presented with the award for consistently achieving accreditation to the CCA Global Standard over 10 years. This is an independent assessment and endorsement of an organisation’s customer service operation, designed by industry experts.

Our contact centre gives people access to expert and timely advice when they need it most, ensuring people remain safe on our roads and helping get them home.

We want people to have smooth and safe journeys and would urge drivers to ensure they carry out basic vehicle checks before setting off on journeys to avoid some of the many breakdowns we encounter, particularly at this time of year.

Highways England is always striving to improve our service. Over the past 10 years we have grown the capability of our contact centre to meet the needs of our diverse range of customers.

We’re extremely proud that our customer contact centre has been recognised in the industry. It represents a fantastic and well-deserved achievement for our passionate and dedicated team of advisors. It demonstrates our ongoing commitment to delivering customer service excellence.

10 unusual calls received by the CCC

– A horrified violinist watched his instrument fall off his bike and onto the hard shoulder en route to his concert performance. The CCC was able to send traffic officers to pick up the undamaged violin and reunite it with its owner at the next junction – and he even got to the performance in time.

–  The manager of a motorway services rang after a driver ran out of fuel and had been living in her vehicle at the site for three days. She had no fixed address and staff at the services were buying food and toiletries for the woman who was very distressed. The CCC persuaded the National Vehicle Recovery Management department to get the woman off the services and motorway– and to forego its charges.

–  One Bulgarian lady stranded in a live lane on the network rang the CCC but had limited English. Using Google Translate to communicate with her, the operator was able to find out exactly where she was and send traffic officers to help.

–  A HGV driver diverted off the A14 found himself lost with all alternative routes seemingly via low bridges or restricted access. The CCC investigated and found one route was available, although this still required a u-turn. After 25 minutes on the call the grateful HGV driver was back on track.

–  A worried mum rang the CCC at 4am because her son was travelling from Manchester to London and had got lost. The tired driver pulled over and the CCC was able to track down where he was and direct him to a nearby services for a sleep. The operator rang his mum to explain he would be home later and she later let us know when he was home safe and well.

–  Another mature man called asking to speak to the parcel office. When told he had rung Highways England he asked for help as he had no internet access. We were able to provide a few numbers for parcel companies and also transferred the call through to the post office.

–  ne nightshift saw a call from a man claiming he had seen a “huge block of ice” fall from the sky on the A5. The CCC flagged it up to the Regional Control Centre and police went to investigate but the ice seemed to have melted away and there was no sign of it.

–  A chatty HGV driver rang up asking for roadworks information and proceeded to give the CCC an indepth lesson on how to put up a curtain pole correctly – his task for the evening when he got home.

–   A deer wandered onto our road network – it was reported to the CCC by none other than a Mrs DEAR.

For additional information on Highways England visit their Website