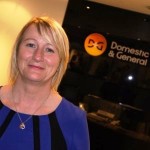 Domestic and General has appointed a new contact centre manager to join its Nottingham team.

Cuffe said: “Domestic & General has a great commitment to developing its people and putting its customers at the heart of everything it does. It’s these core values that attracted me to the business.

“I already feel a great sense of pride in being part of a company which works with so many well-known brand names and that through continued high standards of performance, attracts more and more business. It feels like an exciting time to be joining Domestic & General and I am very optimistic about my future here.”