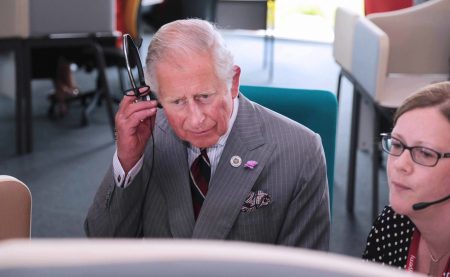 This was a momentous occasion for Moneypenny a thriving and fast-growing business that looks after 10 million telephone calls a year and digital media platforms for 10,000 businesses of all shapes and sizes, from sole traders through to multinational corporations.

The new offices are 90,000 square feet in size and boast a treehouse, a pub and sun terrace, all features that were requested by the staff in a survey to find out their wish list for the new Headquarters.

“We were delighted to welcome His Royal Highness The Prince of Wales to officially open our stunning offices here in Wrexham and to meet our extraordinary staff. We are extremely proud that Moneypenny is recognised as a business that is constantly pushing boundaries, both for its clients and our staff, as is shown in our mould-breaking offices.”

The visit concluded with co-founder Rachel Clacher introducing His Royal Highness The Prince of Wales to staff gathered in the atrium and inviting him to officially open the firm’s new offices by unveiling a commemorative stone.

Moneypenny is the world’s leading provider of telephone answering, outsourced switchboard, Live Chat and customer contact solutions. Moneypenny works with businesses of all shapes and sizes, from sole traders right up to multinational corporations.  In the UK, Moneypenny has over 500 staff, a figure that is growing at a rapid rate and has recently opened offices in Charleston, USA. The company was founded by a brother and sister team in 2000 and currently handles over 10 million customer communications a year for 10,000 businesses. Moneypenny is proud to have won the Queen’s Award for Enterprise and has been recognised in The Sunday Times ‘100 Best Companies to Work For’ five times, including a top 5 listing in 2015 and 2017.