Spark Response has once again done its bit to support Sport Relief by helping raise almost £50,000 towards the grand total. 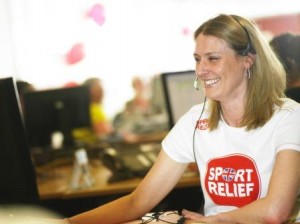 round 70 kind hearted staff from the Gateshead-based company gave up their Friday evening to support the TV spectacular, which involved a host of celebrities, comedy sketches and live performances. It also featured an Only Fools and Horses special starring David Beckham.

During the five hour telethon, Spark’s contact centre took hundreds of calls from generous members of the public and by the end of the evening, over £47,000 had been taken which contributed to the overall £53 million which will go towards a host of charities and overseas projects.

In addition to the money raised on the night, a further £1,000 was raised by staff from raffles and other themed events held in the build up to Sport Relief. Prizes were donated from many of Spark’s clients and local companies including Micro Scooters, Soap and Glory, Knowledge IT, Ethicalsuperstore.com, Thorntons, The Pen Shop, Centre for Life, Occa Home, Barbour, and many more. Jaspers Catering kept the volunteers well fuelled by donating a hot and cold buffet, with drinks coming from Britvic.

Spark employee Natalie Sehnal from Sunderland was one of the volunteers on the night. She said: “I supported Comic Relief last year and it was such a good night so I was happy to volunteer again. And because it’s for charity, it’s my chance to give something back.”

Noel Lambert, Operations Director at Spark Response, was also there to lend a hand. He said: “The atmosphere in the build up was electric and that continued right through until midnight when we switched off. It’s testament to the team in place here that so many people were prepared to give up their Friday night for charity. This is the third year in a row we’ve helped with both Sport and Comic Relief, and we look forward to many more.”