RESPONSE, the Glasgow based Outsource company, has handed over a cheque for £15,000 to Cancer Research UK as a result of fundraising efforts over the last year. 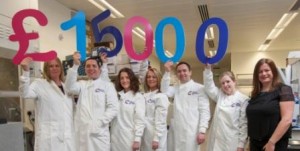 Cancer Research UK was selected by RESPONSE employees as the company’s nominated charity who hoped to raise £10,000; however a packed calendar of creative fundraising activity throughout 2013 has seen the original target smashed.

A ‘Love Week’ was held which involved a themed raffle, music quiz and a Valentine’s post service and ‘Fresher’s Week’ saw the staff dressed up in an assortment of fancy dress outfits throughout their working week, including school kit and pirate and beach dress. Laughs were provided at a Stand up To Cancer comedy evening and team members also entered the Tough Mudder and Race for Life fitness challenges.

Customer Advisor, Ashleigh Morrissey took her efforts one step further, shaving off her head on Wear It Pink day, helping to raise over £650 on that day alone.

The money raised by RESPONSE will fund vital scientific and clinical research to beat cancer, which is undertaken in various locations, including the Beatson Institute for Cancer Research in Glasgow – a thriving community of world-class cancer scientists and doctors who are working to reduce the devastating impact of this disease, not only locally, but around the world. An exciting programme of work has been established at the Beatson to seek out potential drug targets and develop cancer drug treatments of the future, helping millions more people to survive.

Brian Bannatyne, Managing Director for RESPONSE said: “We’re delighted to present Cancer Research UK with a cheque for £15,000 to fund pioneering research carried out on our doorstep into a disease which has undoubtedly affected us all in some way.

“The enthusiasm and energy among RESPONSE employees in their fundraising efforts for Cancer Research UK over the last year has been incredible, with everyone banding together at every possible opportunity to get involved, reflecting our positive and engaging company culture.”

Louise Robertson, Senior Local Fundraising Manager said: “I would personally like to thank everyone at RESPONSE for their truly wonderful and committed support this past year, each and every one of you have truly made a difference in people’s lives with the money you have donated, united we are stronger than cancer, and together we are working towards the day when all cancers are cured.”

Be the first to comment on "RESPONSE Employees raise £15,000 for Cancer Research UK"