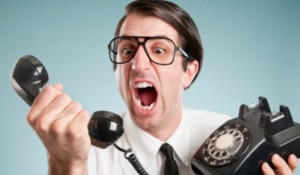 Contact Centre Gripes Not being able to ring a contact centre based in the UK is the nation’s biggest customer service bugbear according to new Which? research.

As part of the Which? annual customer service survey of 100 major UK brands, due to be released later this week, they asked more than 3,500 consumers what made them see red about the companies and shops they use and found:

Customers who experienced good levels of service gave a thumbs up to friendly or helpful staff (53%), staff with good product or service knowledge (29%) and speed of service (29%.)

Which? Executive Director, Richard Lloyd, commented on the research,

“The contact centre and telephone systems are the biggest customer service gripes by far. Firms need to up their game, those that don’t give customers the care and attention they deserve risk losing out to their competitors.”

ings, while one of the UK’s biggest banks earned just two stars for its staff knowledge, phone menu system and woeful waiting times. Find out how your bank fared in the table below.

Broadband service provider contact centres were rated the worst across all the industries we surveyed. Long waiting times was a common problem, with only 58% of calls answered in the first five minutes on average. And it’s perhaps unsurprising you’re unhappy having to wait – 47% of calls were to report a problem. See our table below to find out who was the best rated broadband call centre in our survey.

When it comes to breakdown services, our members told us that most providers operated slick call centres with short waiting times and staff who knew what they were talking about. That’s reassuring to know, when you’re calling from a smoking car by the side of the motorway. Find out if AA are more helpful than Green Flag, or if Britannia Rescue has a better phone menu system than RAC in the table below.

If you experience a prang out on the road, you want to know that you can get the problem sorted quickly, and that the staff will be helpful and knowledgeable. You told us that car insurance call centres were pretty good, although one firm was only rated three stars overall thanks to a poor phone menu system and long waiting times.  Find out who in the table below.

Our survey revealed that there are some electricity call centres where you could be on hold for a long, long time. In some cases, members told us that they were on hold for over 30 minutes. At the other end of the scale we found an electricity company that pick up the phone almost instantly. Read on to find out if it was British Gas, Scottish Power or Ovo energy who were quick to answer.

Our members told us that some gas providers were full of hot air when they picked up the phone, with staff that didn’t have a great degree of knowledge, and confusing phone systems. Take a look at the full results below to see how you rated gas providers, including Scottish Power, EDF Energy, British Gas and Npower.

If you’re looking to make a claim on you home insurance, or just find out who offers the best premiums, you’ll be glad to hear that call centres for home insurance companies were rated fairly well. One company did stand out.  It was rated higher than the others for everything from staff knowledge to waiting times. Find out who in our table below.

If there’s one service that you would expect to know their stuff when it comes to call centres, it would be mobile phone providers. However, as our survey uncovered, it’s something of a mixed bag. The highest rated provider might prove something of a surprise, not being one of the big mobile players. See the full results in our table below.

Which? surveyed 3,501 members of the UK public in May 2015 to ask them what were their customer service likes and dislikes.