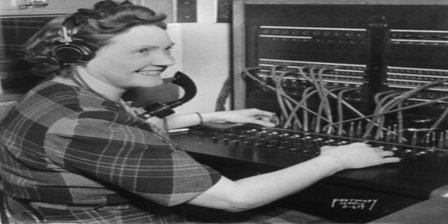 In the beginning there was the telephone. In the good old days, people had a rather bulky and some may say elegant Bakelite device with a big spinning dial and a heavy handset. This rather imposing object would be connected by way of a wire to a socket in the wall that would lead directly to a telephone exchange. Pretty simple and obvious stuff. And thus things stayed for a rather long time.

Then, at some point, some very important people came to the conclusion that instead of making and taking their own calls, they would pay someone to do this for them. So Mr. Big Shot hired himself a secretary. And the PABX (or PBX as it was later abbreviated) was born.

The initial models were nothing but a slightly more sophisticated phone featuring just a few more lights and buttons than the old familiar ones. It simply allowed the secretary, PA or receptionist to put a call on hold and perhaps transfer it as well as cope with more than one outside line.

Soon enough, as is the nature of things, Mr. Not So Big Shot also wanted access to this kind of service in order to show everyone how important and busy he really was. So Mr. Big Shot had to hire more secretaries with flashy phones. This, of course became ridiculous, expensive and meant that secretaries could now justifiably turn down their bosses’ demands for tea and coffee on the genuine grounds of having to man the infernal device now flashing menacingly and incessantly on their desks.

Somebody had to come up with a better idea, so the switchboard operator was created. Secretaries everywhere breathed a collective sigh of relief and put the kettle on. Switchboard operators were a rather joyless and grumpy lot as their job tended to be highly repetitive and their time was spent mainly in a cupboard sized room somewhere in the basement.

So, naturally, it was only a matter of time before they were themselves replaced by machines. These are the advanced, feature rich (some may say bloated) PBX systems of today. In fact, today’s PBX systems have become so complicated that the average person has no idea how to use them. As Bjarne Stroustrup, the creator of the C++ programming language is famously quoted to say: “I have always wished that my computer would be as easy to use as my telephone. My wish has come true. I no longer know how to use my telephone.”

These days, even with a relatively basic PBX, you can have your phone follow you around the building (not physically, that would be creepy), forward calls to your mobile, play messages and take voicemails and even transcribe them and send them to you as email or take your children to school and pick up your dry cleaning while you chat to your boss (OK, I made that one up).

What has all this to do with contact centres? Nothing at all, and this is precisely my point. Let me explain.

As every self-respecting organisation had to have a PBX, and some of them more than one, the manufacturers of such systems rapidly became very successful and powerful. The market leaders in this space have quickly become global multi-billion dollar corporations. However, as new leaner competitors entered the market, the big boys had to find other ways of keeping their shareholders happy by showing ever increasing revenues and profits.

So they started thinking about who else may need an expensive extravagant telephone and it didn’t take long for someone to figure out that the call centre, as the name may suggest, may have something to do with telephony. This triggered nothing short of a gold rush and the makers of electronic switchboards started eyeing up the nascent call centre space like a pride of hungry lions salivating at the sight of a herd of young Thomson gazelles.

Contact centres have very specific telephony related technology needs. Things such as Automatic Call Distribution ( ACD), Interactive Voice Response (IVR), auto-diallers of various kinds, wallboards, up to the minute KPIs, Computer Telephony Integration (CTI) and call scripting are just a few of these technologies. Of course, none of these have much to do with PBX systems, but that inconvenient fact was not going to come between the lioness and her prey.

To illustrate this point, imagine a global tractor or lawnmower manufacturer deciding to move into the luxury sports car market just because luxury sports cars need engines and they know something about making engines. It would soon become apparent that the mowing blades under the carriage and the grass cutting collectors at the back don’t really help much when thundering down an autobahn at 200mph. However, they come as standard (i.e. you need to buy them) with the car.

Let’s face it. Contact centre agents don’t need most of the functionality that a PBX system has to offer. They don’t need voicemail or their own personal extension or automated phone directories or unified messaging or calls forwarded to their mobiles. In some cases, the PBX imposes features which are actually counterproductive or confusing in a call centre environment such as phones ringing or bulky flashy physical devices which occupy lots of precious desk space and have an array of tempting buttons to press.

That hasn’t historically deterred the PBX vendors in any way. Their plan was a simple one. In order to sell more PBX systems they would provide add-on call centre “modules”. Simply brilliant. In order to get the functionality they needed, customers would have to buy the functionality they didn’t want. This is not entirely different from offering your children chocolate coated broccoli in order to lure them into eating their vegetables. The only difference being, of course, that broccoli is actually good for them.

Let me make it absolutely clear that I do not think that PBX vendors are evil organisations in the same way that nobody could ever blame the lions for devouring those cute gazelles. It is as nature intended. They saw an opportunity and they seized it. The problem is that as the contact centre market continued to mature, it grew wiser to the chocolate broccoli confidence trick.

It is becoming quite clear these days that buying a big sophisticated PBX in order to run a contact centre is akin to buying original antique furniture for firewood or an iPad when in need of a small futuristic chopping board (even if it has a piece of fruit depicted on the back!). Yes, it might do the job, but how wasteful is it? The truth is that you are not using the equipment for its intended purpose.

These days you can get the chocolate without the broccoli. You can get an ACD system without the PBX, you can take calls without a flashy bulky phone, you can deploy sophisticated IVR without voicemail and yes, you can make millions of calls without ever touching a keypad. The so called “fact” that you need a PBX to run a call centre has been shown to be misleading at best.

Synthesys™ from Noetica can provide a good quality ACD system with advanced IVR, voice recording, predictive dialling multi-channel capabilities and much more with nothing more than a simple telephony card (or even without one if SIP trunks are used). No PBX required.