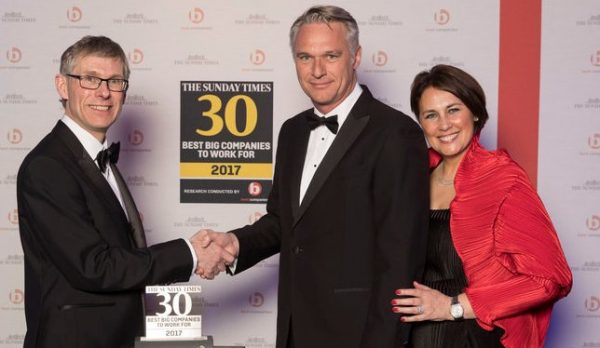 Markerstudy Group of Companies’ Group Contact Centre (GCC) staff are on cloud nine following its fifth year of success at The Sunday Times Best Companies to Work For Awards.

Stampeding into the Best Big Company ‘Top 30’ category for the first year, the Group beat off fierce competition from top brands, Deloitte, MacDonald’s and TBS Bank to be crowned a ‘Best Company to Work For’ in the UK.

Following a glittering awards ceremony at Battersea Evolution on Thursday 23 February, it placed at a triumphant 4th with ‘Extraordinary’ status, three stars (the highest) and glowing statistics to match.

Known for its insurance services, Markerstudy Group of Companies includes Auto Windscreens, Markerstudy Insurance, Zenith Insurance, Lancaster Insurance Services and Geoffrey, employing staff in offices across the UK and in Gibraltar. The GCC handles customer engagement for a number of such businesses.

Turning sixteen this year, the Group has been named a Best Company to Work For, for the last five years in a row and was one of just three insurance businesses to be named in the big company category this year. It was also awarded the Investors in People Gold Champion Standard for a further three years in 2016.
Surveys conducted as part of the awards found 82% of employees believe that they can contribute to the success of the organisation and 82% of staff said that they go out of their way to help each other and have fun together. Furthermore the company was ranked 1st for wellbeing and 2nd for giving something back.

“This is a defining moment for us. To be named as part of a ‘Best Company to Work For’ in the UK is a highlight for our team.

We’ve focused on creating a legacy that our employees can be both instrumental in and proud of.”

For additional information on Best Companies visit their Website