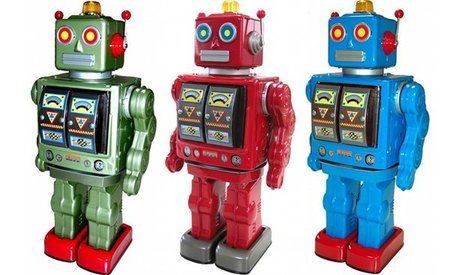 Intelligent Robots? Contact Centre Agents? New research conducted by the leaders in enterprise information management, OpenText, reveals that over a quarter of British consumers (27%) believe a robot would provide better customer service than a human.

When asked in which particular scenarios could offer better customer service from a robot, OpenText found more than a quarter of UK consumers (26%) said they would get better service from a robot when ordering food in a restaurant while one in five (20%) said a robot would better their experience when speaking to a call centre operator. Other findings reveal that:

– Nearly one in five (17%) people said they would prefer to speak to a robot when contacting government departments, and also when switching energy providers

This research from OpenText was conducted soon after a recent report released by Forrester which concluded that use of AI and robots will continue to transform how customers interact with brands and will provide a significant competitive edge to businesses. The analysts argue that disruptors will use AI/cognitive services, based on large data sets, to scale their businesses and steal customers from competitors.

This prediction from Forrester that the introduction of robots will help businesses improve their level of customer service was also reflected in the research by OpenText. The company found that more than one in five (22%) of people believe businesses can significantly reduce customer waiting times by increased use of robots in the workplace. Interestingly, male respondents were more likely to believe businesses could reduce customer waiting times with 28% saying ‘yes’, compared to just 15% of female respondents.

“Customers today expect nothing less than exceptional customer service and will not hesitate to seek services elsewhere if they don’t get it. Businesses are fast realising that they need to alter the way in which they interact with their customers to meet their demands. The introduction of robots and AI will offer an opportunity to revolutionise this interaction process in the very near future.

“Cognitive systems are self-learning systems that simulate the way a brain works using data mining, analytics, pattern recognition, and natural language processing to learn, interact, and make decisions. Digital enterprises of the future will incorporate cognitive tools and analytics into their infrastructure. These will then be used to amplify human capabilities, working seamlessly alongside people to uncover underlying patterns and trends, provide better insights, make decisions, and prescribe actions more efficiently.

“Companies that use this information will gain a competitive advantage. With processes and data fully integrated, businesses can bring together the benefits of both silicon and carbon to offer better performance and insights so end users can receive the ultimate customer experience.”