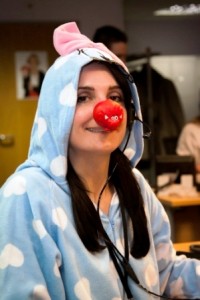 Last Friday 15th March 2013, 60 employees, friends and family members at Hemel Hempstead based company Eckoh dressed in onesies and red noses to take calls for Comic Relief. Between 6pm and midnight, over 1800 calls had been taken.

Each year, Comic Relief relies on the contact centres of organisations and businesses around the country to boost the number of lines available for public donations. Eckoh wanted to take part this year to show its support, so it put out the call for volunteers to work into the night and raise money for Red Nose Day.

“It was so much fun for a very worthy cause.” said Victoria Norman, Eckoh’s Contact Centre Manager.

“This was the first time Eckoh had volunteered its contact centre for a national charity event and it was a tremendous success. As a team, we’re all so proud to have participated in this year’s Red Nose Day. It was heart-warming to see so many people enthusiastically giving up their spare time, taking to the phones and dressing ‘funny for money’.”

Local businesses were also on hand to keep the volunteers fuelled until midnight. Victoria said: “We received such amazing support from local retailers. Starbucks gave us coffee and tea all night, Dominoes came in with a big pile of pizzas and Red Bull gave us a sack load of energy drink cans.”