HRH The Countess of Wessex was welcomed by ambulance service staff in the Crawley sunshine as she attended South East Coast Ambulance Service to officially open the Trust’s new Emergency contact centre and HQ on Manor Royal in Crawley. 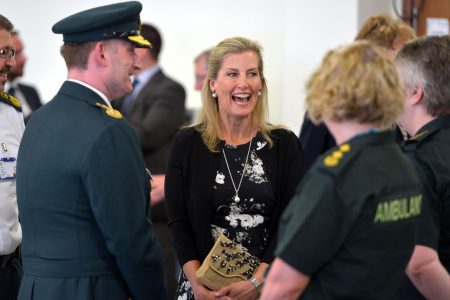 ccompanied by the Lord Lieutenant of West Sussex, Mrs Susan Pyper, The Countess was given a tour of the EOC where she met and spoke with emergency medical advisors, dispatchers and clinicians 8 May 2018.

The moves provided greater capacity across two EOCs and ensured SECAmb is better placed to manage current and future demand. It also meant support services were brought under one roof for the first time since the formation of SECAmb in 2006 with the merger of Kent, Surrey and Sussex ambulance services.

The centre, with SECAmb’s other EOC in Coxheath, Kent, typically handles some 2,500 calls every day. The new EOC is home to some 250 staff with a further 250 support staff based on the floor above.

999 calls are answered by emergency medical advisors non-geographically across the Trust’s two EOCs. Ambulances are dispatched locally from each EOC. A team of clinicians are also on hand in each EOC to provide advice and support to patients and colleagues.